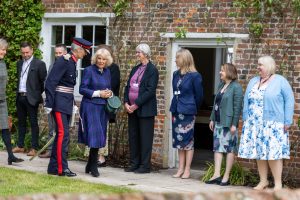 On Wednesday 6 April 2022 Jane Austen’s House, in Chawton, received a very special visit from the Duchess of Cornwall.

Her Royal Highness visited the house – once home to Britain’s most beloved author and now a museum – as an avid reader and supporter of literacy. 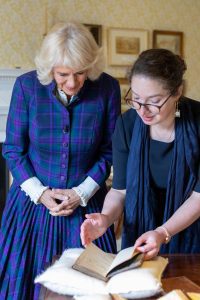 The visit comprised a tour of the House including the Drawing Room, where Jane Austen read aloud from her very own copy of Pride and Prejudice the day before its publication in 1813; the Dining Room, where she wrote and where her writing table remains; first editions of her novels; two of her letters; necklaces; family portrait miniatures and the iconic Mr Darcy white shirt worn by Colin Firth in the 1995 BBC adaptation of Pride and Prejudice – part of the museum’s current display on Regency underwear. There was also a meet-and-greet with staff and trustees.

Following the success of Her Royal Highness’ reading lists, shared during the pandemic in 2022, there is now an online community space, The Duchess of Cornwall’s Reading Room, which has become a hub for literary communities around the world and celebrates literature in all its forms. It offers book recommendations and exclusive insights from authors. For more information click here and follow on Instagram.

‘Jane Austen is one of the world’s most beloved authors and her House is the most treasured Austen site. It is wonderful to know that with the help of Her Royal Highness’ The Duchess of Cornwall’s Reading Room we continue to reach new audiences and to share Jane’s extraordinary life, works and legacy with the nation and indeed the world.’ 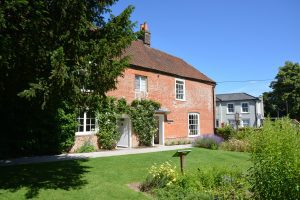 Jane Austen’s House, where the author lived and wrote and published her six novels from 1809 to 1817, was opened as a museum in July 1949 by the Duke of Wellington. At the time only the front room was accessible to the public as the House was still occupied by tenants! Since, the House has been restored and the interior restyled to make it look how it did when the Austens lived there.

Now work continues to preserve the Grade I listed building and the museum is home to an important collection of objects associated with Jane Austen (including her jewellery and first editions of her novels) and offers a year-round programme of tours, talks and workshops celebrating Jane Austen’s life and works and educating visitors about the times when she lived.

For more, visit the museum’s website or browse events here. For Easter it is hosting The Great Easter Bonnet Hunt – find all the Regency bonnets for an Easter treat. Plus, see Mr Darcy’s white shirt for yourself by visiting the exhibition, Jane Austen Undressed, which runs until Sunday 2 October. The museum is also due to host a week of events from Sunday 19 to Sunday 26 June, for Jane Austen Regency Week.

Jane Austen’s House is open every weekend 10am to 5pm. The House will open 5 days a week from Wednesday 4 May. 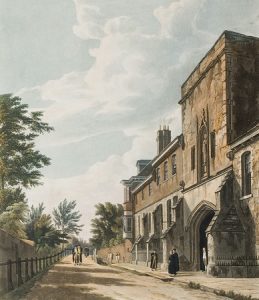 In May 1817 Jane fell ill and moved to Winchester for treatment for Addison’s disease, and a house in College Street, next to Winchester College – where many of her nephews went. A blue plaque hangs above the door to the property, now a private residence.

Sadly Jane died only weeks later, aged just 41, and was buried in the north nave aisle of Winchester Cathedral. In 1900 her fame afforded her a memorial window and today an exhibition about her life sits beside her grave. Book your place on a special tour on Friday 8 July – ‘Jane Austen: Her Life & Times’ Tour.

Jane Austen’s brother Edward – who offered his mother and sisters the property (now Jane Austen’s House) on his Chawton estate – lived in Elizabethan manor, Chawton House. Jane regularly visited the house, which is now open to the public and hosts a collection of women’s writing dated 1600 to 1803. Visit their website or search here for what’s on. 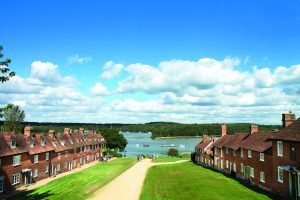 Learn more about Jane Austen and visit the places she spent her life with the Austen Trail. Including the village of Steventon, in north Hampshire – her birthplace. Here, visit St. Nicholas’ Church where Jane was baptised. Stop for a bite to eat in the Grade II listed Wheatsheaf Inn, in North Waltham – once a coaching house Jane visited as a child. She visited Portsmouth while her brothers were serving in the city in the Royal Navy and which she describes in her novel Mansfield Park; and she lived for a while in Southampton where she danced in the Dolphin Hotel and visited the ruins of Netley Abbey and 18th century shipbuilding village, Buckler’s Hard.