A day in the life of a Winchester Choir Boy

Every day they have to produce music to the highest standard, and there’s no scope for mistakes. Their school chapels are the prestigious Winchester Cathedral and Winchester College. So it’s understandable that the lives of the choristers and Quiristers of the Pilgrims’ School in Winchester revolve around music, so much so that choirboys have even been known to sing in their sleep. We spent a day with Rupert Dugdale, Head Chorister, to gain an insight into the world of a twelve-year-old choirboy – a world like Harry Potter’s Hogwarts where the magic is music and there’s even a ‘quidditch’ style game called Hedgehogs & Aardvarks. 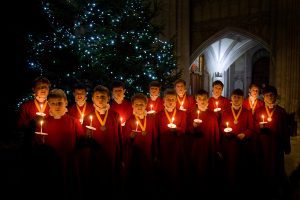 I usually wake up at about 7 o’clock when the rest of my dorm starts talking. Because they’re junior boys they talk a lot. I don’t spring out of bed – I just lie there half asleep, half listening, looking forward to breakfast which is usually nice with sausages and bacon.

After breakfast we sing and rehearse until 9 o’clock with our choirmaster Mr Lumsden. The music block and the Pilgrims’ Hall are the bits of the school which are really old. There are fourteen of us who are ‘dubbed’ and six probationers. If you’re a probationer it’s like you’ve got a learner plate stuck on your back and when you’re ‘dubbed’ they say, ‘alright you can sing all the time now’; they’re sort of granting you your licence.

It’s really weird when you hear yourself sing. You think: ‘Oh is that how I sound?’ You sound totally different – your voice seems higher in a recording. Every now and then we have one-to-one lessons with our voice coach, Mrs Jones. She checks on our breathing and the way we stand and we do lots of ‘nonsense exercises’. You do scales and arpeggios using random words like ‘margherita’ and ‘spaghetti’.

In my opinion my singing is not awesomely amazing but I think it’s OK. I can’t remember the first time I sang in public. Before I came here I didn’t sing a lot although I have quite a musical life at home. I think all the German composers are probably the best. Especially Bruckner and Reinberg. They just get it so totally right.  And Duruflé; we’re doing his Requiem right now and it’s great. I don’t listen to classical music to relax because you’ve had enough by the end of the day. I like things like The Killers, Keane, The Feeling, stuff like that. My parents have got loads of CDs of the choir, and we’ve just made a recording with Clare Rutter and Stephen Gadd who are famous opera singers, so they might get that.

Immediately after a practice you go off to your first lesson. My favourite subjects are probably French, music, art and English. I like drawing and I quite like abstract art, like Kandinsky, Miró – it makes you think more. We went to the National Portrait Gallery to see the Wyndham Lewis exhibition and that was quite cool. Music will definitely play a part in my future; art might or might not. 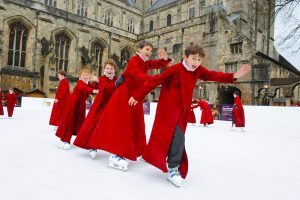 At lunch you’ve got half an hour to eat then half an hour to practice an instrument. If you’d rather, you can just read a book or something like that. Then you’ve got games – rugby, football or cricket, but sometimes you can just run around outside.
I wish I was better at rugby. I’m rubbish at it. I see the ball coming towards me and I just know I’m going to get nailed. I like clay pigeon shooting and snorkelling though. I suppose they both catch you in a moment – looking at the fish or waiting for the next target to be released you don’t think of anything else.

I feel proudest of my singing at a wedding, just knowing that I’ve played a part in a really important moment of someone’s life. Another thing I won’t forget was a memorial for soldiers who had died in training or in the normal course of their duty. Our housemaster’s dad’s name was on there. He was in the air force and had taken a plane out for a test run: it went AWOL so he crashed it into the sea to avoid a town. We had just started singing Pie Jesu when he saw his father’s name and it was a very emotional moment. What got to me was the fact that there was room for a further 17,000 names on that marble. It really makes you think.

Before a big solo you do get a bit daunted and think: ‘Oh no, I’m not going to be able to do this,’ but when you’re singing the nerves just go. At Christmas in the cathedral we have loads of massive concerts and there’s this one event where you come through the quire and it’s all dark and then suddenly the lights go on. You can see just how many people are there and it takes your breath away. Then you start to sing and forget about all that.

When I’m in the cathedral singing I think I take it for granted; it’s just one of those things in life which you do. It’s like getting up in the morning. You’ll sing something that’s really, really good and you hear some people actually start crying. I really like being a choirboy but I don’t think I’ve quite grasped what it means. I think I’ll only understand it when I look back at it when I’m older.

My favourite time as a chorister is choir time when the choir stays in for about a week of the holidays. It’s just us in the school and we play all sorts of games. The best one is Hedgehogs & Aardvarks which we play on Danebury Hillfort. The aim is to gain territory from the other teams and the ultimate prize is a golden rugby ball. We get unbelievably muddy: it’s hilarious. After school we go over to the cathedral and do half an hour’s practice and then Evensong. Then we’ve got an hour of homework, and because we’re boarding we have forty-five minutes of free time. Then we’ll get into bed and read. Because I am in Year 8 I get to go downstairs and have some toast in the dining room if I want, then go back to bed. I find it really difficult to go to sleep because usually someone is snoring. Usually I don’t dream about anything because I’m really tired. I don’t sing in my sleep but there is one boy in our school who did: he woke his dorm up doing it – but only the once.

“The Winchester boys are tonally and technically superb…”(BBC Music Magazine)
Fixed charges apply to general visitors to Winchester Cathedral but there is no charge to attend services, including Evensong, a short, mainly choral service with beautiful music sung by the Winchester Cathedral Choir. Evensong takes place at 5.30pm on Monday (men only), Tuesday, Wednesday (sung by a visiting choir) Thursday, Friday and Saturday and at 3.30pm on Sunday. All are very welcome.To purchase a CD of the Winchester Cathedral Choir or of the Choristers and Quiristers singing together, visit: www.winchester-cathedral.org.uk For telephone enquiries call: 01962 857 200 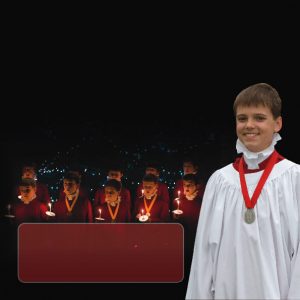