On Friday 8 May 2020 it will be 75 years since the guns fell silent in Europe marking Germany’s surrender and the end of the Second World War. Although many large scale commemorations have been postponed until August, we can all still pay tribute to the heroes and heroines of the time at home.

Millions of people took to the streets on 8 May 1945 – Victory in Europe Day – to celebrate peace after years of war. 75 years later the nation will be metaphorically coming together as we all reflect on this momentous date. There are still many ways you can get involved from your own home.

At 3pm on 8 May 1945, Prime Minister Winston Churchill announced to the country that the war in Europe had come to an end. Raise your glass filled with a refreshment of your choice and toast the heroes of WWII at 3pm, 75 years later with the words  “To those who gave so much, we thank you,”.

Explore VE Day as a family with the downloadable resource for 7 – 14 year olds from the British Legion. Learn more about VE Day and remember this inspiring generation.

Have a go at making some Great British Bunting to hang in your windows with the How to make bunting – guide from the BBC – don’t forget to share your homemade creations using #GreatBritishBunting. Why not hold a 1940s style Afternoon Tea at home using some of these delicious recipes or have a go at replicating Churchill’s Fruit Cake using this video. 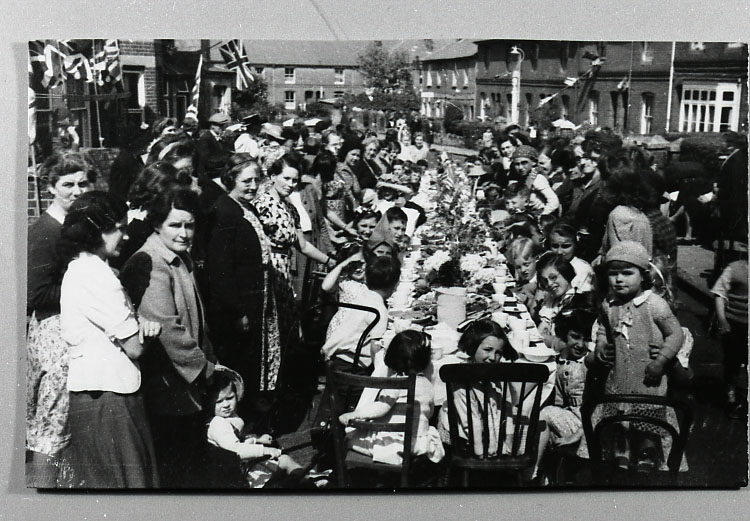 Winchester has a rich and varied military history. From Iron Age forts, to Civil War sites, through two World Wars to the completion of a Nuclear bunker sited at Twyford – the district’s military stories span centuries of history and you can find out more from our military trail. Take a virtual tour of the Winchester Green Jackets (Riffle) Museum and explore the history of the Royal Green Jackets.This VE day explore Winchester’s rich military history and the significance of World War II in the district. 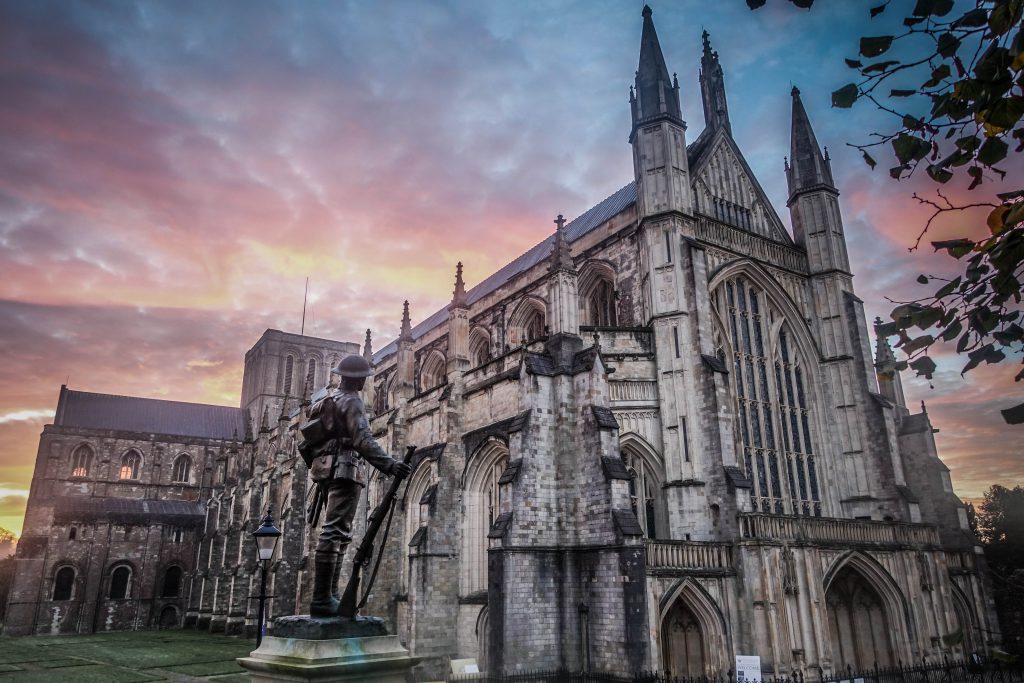 War memorial outside Winchester Cathedral featuring a bronze soldier – a memorial to the Kings Royal Rifle Corps, who lost their lives during the two World Wars © Javaid Akhtar

Wessex Film and Sound Archive and Hampshire Archives and Local Studies are offering a fascinating glimpse into their collections online on Friday 8th May with a film screening and virtual exhibition. Their collections contain a wealth of material about the region, its involvement in wartime and the peacetime celebrations. Click here to find out more.

Founded in 1382, Winchester College has the longest unbroken history of any English school. Whilst WWI claimed the lives of over 500 old Wykehamists, a further 275 died in World War II. Officially opened in 1924, the War Cloister was designed by Sir Herbert Baker to commemorate those who had lost their lives. Notable Old Wykehamists with a military career who were all awarded the Victoria Cross include Dennis George Wyldbore Hewitt (1897- 1917); Charles Doughty-Wylie (1868-1915); Daniel Burges (1873- 1946); Arthur Forbes Gordon Kilby (1885-1915); and Air Chief Marshal Hugh Dowding (1882-1970). 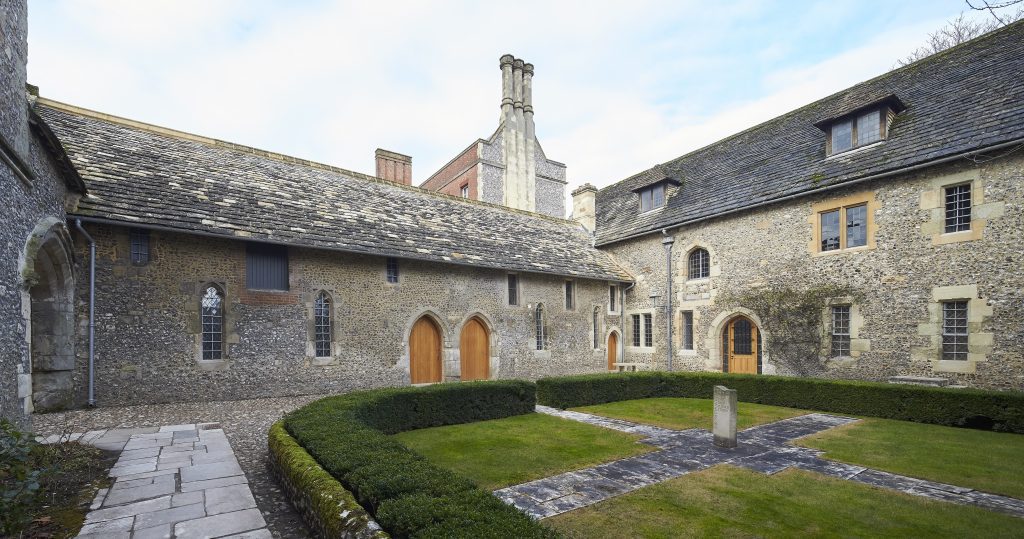 Bushfield Camp was an army training camp functioning during WWII and, during the late 1940s, the camp was jointly run by the Rifle Brigade and the King’s Royal Rifle Corps. National servicemen and recruits to the Green Jackets Brigade trained during the 1950s and 1961-64 respectively. The parade ground and derelict buildings remain today.

This key Royal Flying Corps base was established on the site of the old Winchester racecourse on Worthy Down in 1917. In 1918, when the RAF was formed, it became an RAF base, home to squadrons of bombers. AirMarshal Portal and ‘Bomber’ Harris both passed through. The airfield, infamous for its uphill landing, became unsuitable for larger and modern aircraft and was transferred to the Royal Navy as HMS Kestrel in 1939. The station played host to a variety of Fleet Air Arm squadrons and aircraft types including the Swordfish, Skua and Fulmar during WWII. Bombed by the Luftwaffe in August 1940, the station was heavily defended with a ring of 32 pill boxes and trenches. Sir Ralph Richardson and Sir Laurence Olivier both served at Worthy Down with the Fleet Air Arm. In 1952 the Naval Air Electrical School moved here when the base became HMS Ariel. In 1960 the Fleet Air Arm handed the base over to the army and it remains an army base. 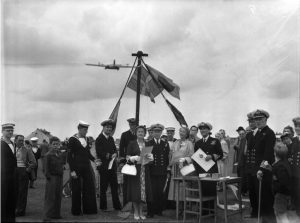 Located directly opposite Normandy was the springboard for ‘Operation Overlord’, the code name for the Allied Invasion of Europe in World War II. The county became a vast armed camp full of allied troops encamped in towns, villages and woods. Winchester’s newly-built by-pass became a giant tank park and camp for British and American troops. Even Peninsula Barracks in the city was taken over by the Ninth US Infantry Division. It was here that American troops were reviewed by Churchill and Eisenhower. 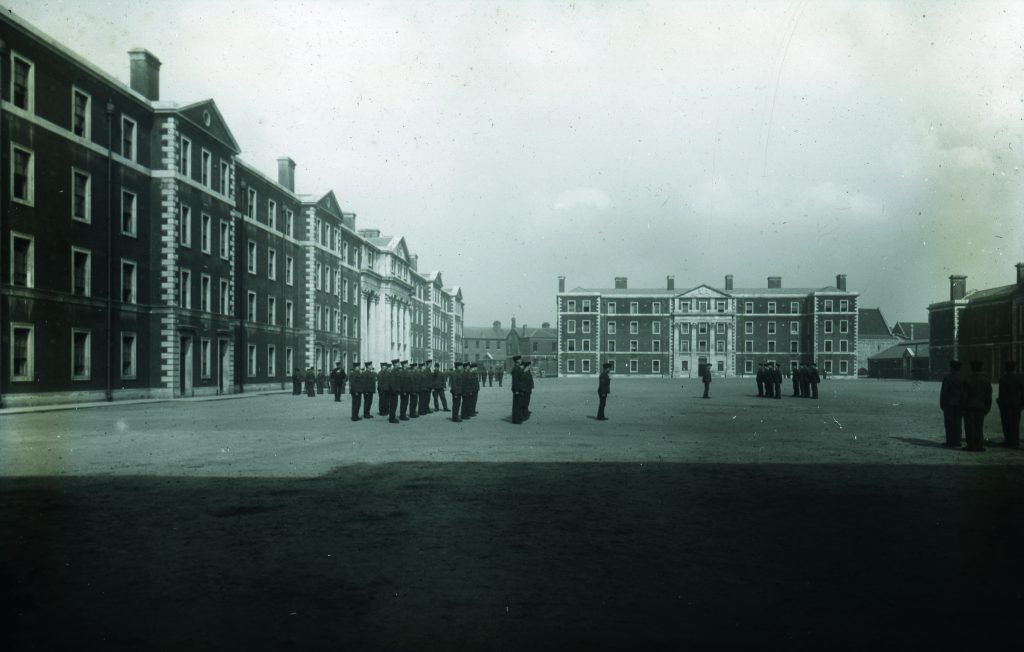 Fort Southwick became the operational headquarters of General Eisenhower, the Supreme Allied Commander-in-Chief of Allied Forces who co-ordinated all the planning for ‘Operation Overlord’. The Golden Lion pub became the unofficial officer’s mess where Eishenhower enjoyed half pints of the pub’s own-brewed bitter.

General Eisenhower addressed American troops at Cheesefoot Head just prior to the invasion of Normandy in the early hours of 6 June 1944.

On 2 June 1944, Churchill and members of his Cabinet: General Eisenhower; Charles de Gaulle; Canadian William Lyon McKenzie King and South African leader Jan Smuts all met on the royal train in the siding at Droxford. A plaque marks the event. Droxford was chosen because of the protection against enemy aircraft afforded by a deep cutting. The old Meon Valley line closed in 1955 and the station is now a private residence.

In late November of 1943 the U.S. 47th Infantry were stationed at various sites around Winchester (Alresford, Tichborne, Cheriton, Armsworth, Bighton, Bishop Sutton and Northington Grange). The HQ at 50 Broad Street, in Alresford is marked by a plaque. The men named the local public houses the ‘eight stars to victory’. When Hambone Jr, the regiment’s faithful canine mascot, was run over he was buried at The Dean, Alresford. Aburial stone erected in 1962 with these words: 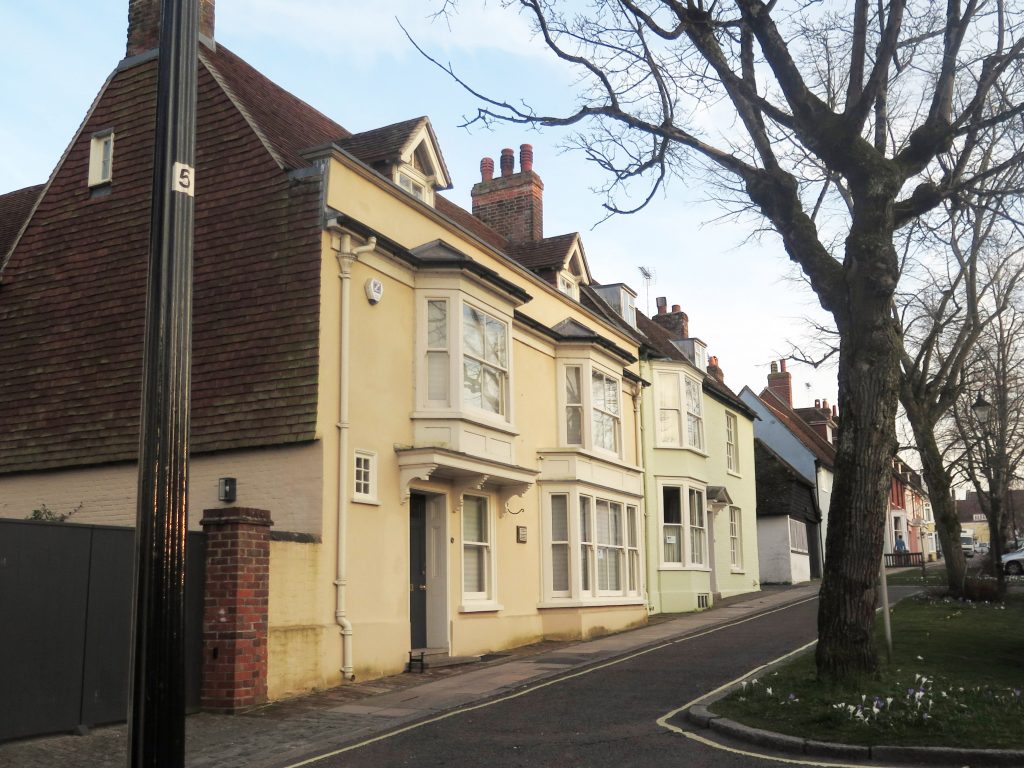 Between September 1941 and March 1944, Cunliffe-Owen Aircraft used an area within the Marwell Estate as an airfield to support the manufacture of military aircraft at its nearby factory at the site now home to Southampton Airport. After the end of the war the airfield was returned to agricultural use. Some of the hangars remain.

Explore the history of VE Day throughout the nation and find more ways to get involved here.