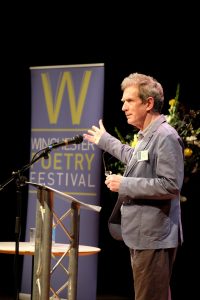 A founding trustee of Winchester Poetry Festival, one of the many celebratory festivals held throughout the year, Keiren considers some of the city’s literary heroes in the year commemorating the 200th anniversary of John Keats’ visit.

During August and September 1819 the great romantic poet John Keats spent two months in Winchester, which he described in a letter to his sister as ‘the pleasantest town I ever was in’. I’ve lived and worked in Winchester for almost forty years and I know just how he feels. Keats’ day invariably featured an exploratory walk while mine generally begins with a trawl through the inbox. Today my eye is caught by a note from Wendy Cope with a query about a poetry competition for young people. She loved living in Winchester and the house in Kingsgate Street she shared with her husband Lachlan Mackinnon is one of the twelve Sites of Special Poetic Interest on my occasional literary tours around the city centre. The team at the bi-annual Winchester

Poetry Festival is always looking to provide free events and this walk is one of them.

The trustees keep the pot on the boil during the in-between year with other events and activities. The 400th anniversary of Shakespeare’s death was celebrated in 2016 with an all-day reading by 154 individuals of every one of his sonnets.

John Keats stopped off in Winchester in search of a library. He was enchanted by the city: the buildings, the trees, streams, streets, the cathedral and college, though he was irritated by the fiddle practice of his landlady’s son. I’m obsessed by the question of where he lodged. He wrote fifteen of his glorious letters from Winchester and doesn’t give his address in any of them. It was probably in Colebrook Street, between the Guildhall and the Mercure Hotel, in tenements which were demolished in the 1955/56 clearances.

Thinking of College Street and the cathedral coincides with news about Jane Austen, the city’s other great literary hero. I hear from Jane Austen House Museum in Chawton, where I’m also a trustee, that writer/comedian/director David Baddiel is to be the museum’s ambassador for 2019 to help celebrate its 70th year. He describes Austen as ‘one of the greatest geniuses in English Literature, the mother of the modern novel.’

My main aim for the year is to get back to work on the Literary Winchester website, an anthology of 1000 years of writing which is either inspired by or features Winchester and includes about seventy names.

However, it’s back to the nineteenth century for my current reading. I like to tackle one major classic every year, and this time it’s Victor Hugo’s extraordinary, and very lengthy, Les Misérables, or The Wretched as it is in the English translation I’m enjoying.

Keats’ riverside walks inspired his wonderful ode ‘To Autumn’, one of the nation’s favourite and most anthologised poems. Follow a self-guided leaflet for this walk available from the tourist information centre or online click here. 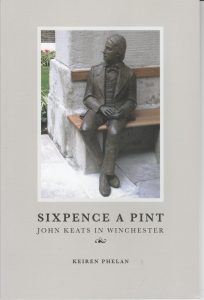 Get involved with many of the events and activities happening across the district to mark the 200th anniversary of Keats’ stay in Winchester, click here.

Keiren Phelan produced a booklet in 2016 Sixpence a Pint about Keats’ time in Winchester and he has plans to publish an enlarged and revised edition for 2019.