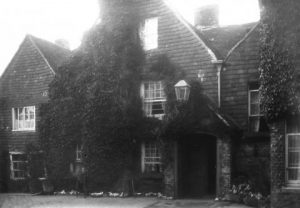 The Crown Inn has played a large part in Bishop’s Waltham’s history. This is a timber framed building with traces of old Tudor brickwork and panelling still existing.  Admiral Pierre Villeneuve, Commander of the combined French and Spanish fleet, was brought here after the battle of Trafalgar.  At one time, it was a great place for cock fighting.  The Crown also figured in the Bishop’s Waltham Beer Riots of 1884.  These were caused by the local curate’s objection to the renewal of licences of some of the public houses.  The rioters, fired by copious amounts of beer, threw the unfortunate curate into the fish pond and ran riot, with fighting in the Crown.

Now cross the road to the grounds of Bishop’s Waltham Palace.