Visit Winchester > Blog > ‘Made in Winchester’ gift ideas and more!

‘Made in Winchester’ gift ideas and more! 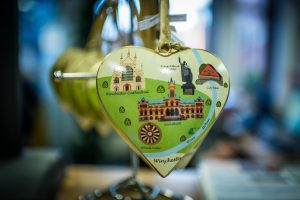 If you want something done…

… head to the Winchester district, where countless small business owners must have had that exact thought and are now producing some of the finest food, drinks, and gifts around – from ice cream to gin, skincare to candles.

Check them out and all the lovely local and family history behind them! 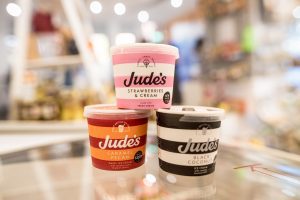 Let’s start with Jude’s Ice Cream, in Twyford, which was founded in the owner’s barn and named after his wife. The first tub of Jude’s was sold to the pub across the road in December 2002 and since then the owners’ sons, Alex and Chow, have joined the family business. Jude’s has also picked up over 50 awards; become a carbon negative business; and its flavours range from vanilla to ginger spice (there are also low calorie options), as well as an ice cream for dogs! Look out for their distinctive stripy packaging! 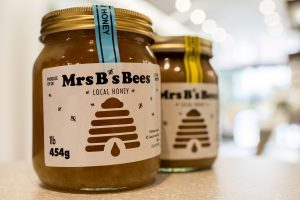 Mrs B’s Bees is run by a family of beekeepers that owns 200 hives (including in Alton) and makes jars of honey and sells honey comb. The family picks unique locations for their hives – wildflower meadows, orchards, and sweet chestnut woodlands – so the bees have different habitats to work with, to produce a range of  honeys (each jar is labelled with its hive’s location). Mrs B’s Bees also makes and sells beeswax candles, wraps (a natural alternative to cling film or foil), and furniture polish. 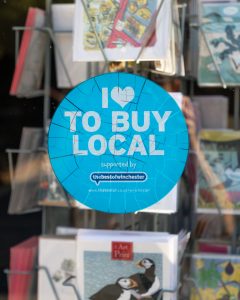 Or why not treat yourself to some luxury chocolates from Winchester Cocoa Company, which sources local ingredients and hand fills each chocolate with fresh fruit purees, natural flavourings, nuts, herbs and spices – to make delicious selection boxes (including truffles and caramels), slab bars, and drinking chocolate. Some of the unique award-winning flavours on offer include orange and assam tea, yuzu with chilli, rhubarb and ginger, and raspberry, lime and mint. Email them about wedding favours!

And if ice cream for your dog isn’t your cup of tea, try Dudley & Sage who make delicious 100% natural, responsibly and sustainably sourced dog treats – from beef biltong to pigs ears, fish skin cubes and kangaroo or ostrich sticks. The business was started in 2019 after the owner learnt that their dog Dudley had a sensitive tummy; and finding suitable treats for him proved challenging. Visit the website for one-off and subscription boxes, or to ‘build your own’.

Looking for something to wash down all that ice-cream, honey or chocolate you’ve enjoyed? Family business, Hill Farm Juice, does a range of apple juices including ‘russet’, ‘cloudy’, and ‘with ginger’. Pressing at the farm, in the South Downs National Park, began in the 1970’s, and since then, Will Dobson’s juices have won numerous awards and the team can be met at farmers’ markets and shows. 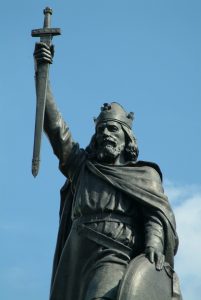 Anyone for a tipple?

Alfred’s Brewery began in 2012 after brewer Steve – who had a decade’s worth of experience brewing professionally – decided he wanted to open a business in his hometown. Since then, it has produced a range of beers named after the city and its history; and been recognised for its eco efforts (the business uses 100% renewable gas, LED lighting, minimises water, and encourages recycling). Or try a beer from Red Cat Brewing, which was born in 2014 after local pub landlord (and small time brewer) Andy fancied a move toward larger scale brewing. It now rolls out everything from award-winning ales and porters to recipes that think outside the box like a coffee cream stout or beer with a lemon infusion. If you fancy a taste of the oldest alcoholic drink in the UK, Chalice Mead can help – a business that gives the heritage drink (made with honey) a modern twist by adding ingredients such as nettle, chocolate, chilli, elderflower, and caramel. Its founder, Mike Wagstaff, owns woodland left to flourish naturally to encourage bees to pollinate the wildflowers and has donated money from sales to a charity called ‘Give Bees A Chance’. Check out the website for gifts and recipe ideas. 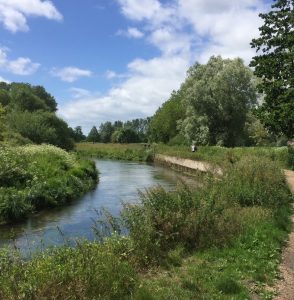 Or if you like something a little fruitier, why not give Meon Valley Cider a try. Set up in 2015 by Charlotte and Nigel Johnson, the cider is made with locally sourced apples and available from village shops, pubs, events, even a National Trust property. Also, starting as a germ of an idea that year – Dampney’s Remarkable Drinks, after generations of the family sharing their hipflasks of homemade sloe gin. A little experimentation later with other fruits, and more gin, vodka and rum-based liquers were born. Nowadays they continue to taste test their products before bottling and enjoy friends’ recommendations for other recipes (like a marmalade vodka, thanks to the Brooks family in East Meon). 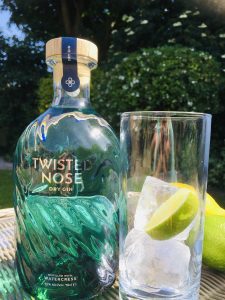 Finally, Winchester Distillery in Old Alresford. Launched by Paul Bowler in 2014, from his small home kitchen – after leaving his career and daily commute to London – products now include Winchester Dry Gin (launched on World Gin Day 2017 at the Great Hall in Winchester, as a tribute to its home city and inspired by King Arthur’s Round Table hanging in the hall), and award-winning Twisted Nose Dry Gin (which captures the taste of watercress grown at the distillery and locally grown lavender). 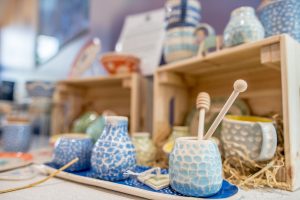 2Spots Ceramics is owned and run by Sarah, from her home in Colden Common. A mechanical engineer by trade, after starting a family she turned her passion for pottery in to a business and now makes crockery; hosts baby hand and footprint sessions (including travelling to baby, toddler, and NCT groups in the area); adult pottery classes; and pottery painting parties for children and/or grown ups. 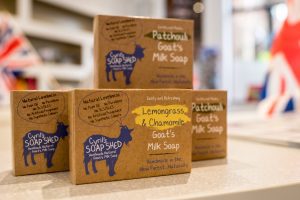 Next, Bee Good was set up by Simon Cavill and his wife – looking for a more natural approach to skincare after Caroline’s sensitive skin was irritated by products already on the market. Studying 17th century recipes, the couple transformed the honey, wax, and propolis (resin-like material made by bees) from Simon’s hives, to make lip balms, hand creams and much more. Alternatively, Cyril’s Soap Shed makes award-winning natural goat’s milk soap – suitable for sufferers of eczema, psoriasis, and dry skin problems. Named after the founder’s grandad’s shed, the business came about after she gave up her full-time job in 2006 and looked in to self-sufficiency (buying chickens, growing vegetables, and getting a goat for milk – which she turned in to cheese, yogurt, and soaps – the milk naturally high in vitamins, minerals and acids that nourish and rejuvenate). Or discover the body care and home fragrances produced by Lavender Fields, based at a family-run farm in Alton, where lavender was introduced in 1999 (the lavender field is now a local landmark, where eight varieties are grown). 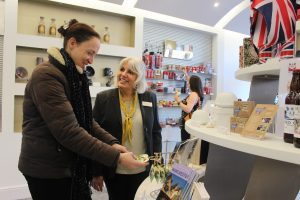 If you’re looking for jewellery, search silversmith Carol Wade (who also runs workshops); Hilary Bowen who creates with silverclay; Sea Clay Studio (the artist’s items are made with polymer and are inspired by nature and the coast); and check out O What A Feeling which primarily produces stationary (including cards and stickers), but also badges. 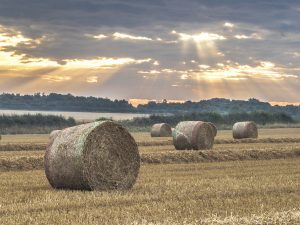 Lastly, you can’t go wrong with a candle, and Hampshire Candles – established by Tom and Paul last year (2020) as a result of lockdown – not only produce scented candles and wax melts, but also reed diffusers and room sprays. Over 70 different scents are available, from ‘fresh linen’ to ‘rhubarb and custard’, ‘lime basil and mandarin’ to ‘santas socks’! They also produce monthly subscription boxes. 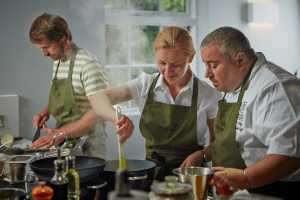 Or make your own…

The Colour Factory is a creative hub in the city centre that’s been going for over 25 years and hosts art courses run by its resident artists – from painting to jewellery making and interior design. Formerly the old park keeper’s house, it now contains artists’ studios, a classroom, shop, and gallery.

Or head to Season Cookery School – at Lainston House hotel, in Winchester –  for a class led by award-winning and Michelin-starred chefs. The school has a state-of-the-art kitchen facilities, a modern dining space and kitchen garden complete with pizza oven. Treat someone to a cookery school gift voucher! 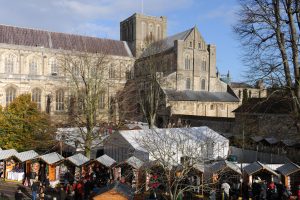 Find products from nearly all these businesses at Winchester Visitor Information Centre (on the ground floor of Winchester Guildhall)… as well as greetings cards and calendars by local author Bill Hoade, postcards and calendars by photographer Blue Stevens, fold out cards by artist Daphne Vaughan (who also runs art classes from her studio in Winchester), cards and postcards by artist Josephine Chisholm (who commissions have included the first publicity illustrations for Winchester Christmas Market) and a stationary range from local artist and illustrator Jonathan Chapman.