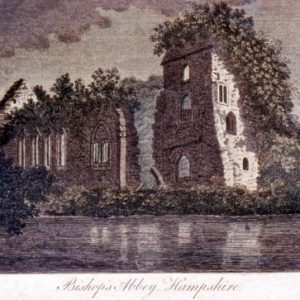 Bishop’s Waltham Palace was built in the 12th century by Bishop Henry of Blois, the grandson of William the Conqueror and brother of King Stephen. For centuries, the Palace was an important residence of the powerful Winchester Bishops and hosted many royal visitors.  Henry V stayed before the battle of Agincourt and Queen Mary I waited here for King Philip of Spain to arrive for their wedding. The remains of the present palace are mostly the work of Bishop William of Wykeham in the late 14th century.  The Palace was probably badly damaged in the 17th century when the royalist garrison held out here during the civil war.

The Palace is in the guardianship of English Heritage.  The Palace grounds are open to the public between May and September from 10am to 5pm.  The museum and the farmhouse are open Saturdays and Sundays from 2pm – 3pm.  Access to the grounds and museum are both free of charge.

Now walk through the grounds to the South Pond.