10 works of art to discover in the city

Winchester is a city renowned for its rich history and stunning countryside but it is also a haven for art lovers and a creative space for artists, sculptors and designers. The city is home to some amazing pieces of public art from sculptures and statues to elaborate benches. Take a walk around and discover 10 of our favourite pieces.

Statue of King Alfred the Great – One of the most obvious works of art greets you as you enter the city. The King Alfred statue on the Broadway was erected in 1901 to mark the millennium anniversary of King Alfred’s death. His magnificent bronze statue was designed by Hamo Thornycroft and stands 4.5m tall and weighing just over five tons, towering over the city.

Jane Austen Bench – Walk a little up the Broadway and you will reach Abbey House – the Mayors official residence in Winchester. Just through the gates, next to the front door, is Jane Austen’s Bench commissioned by Winchester City Council to mark the 200th anniversary of Austen’s death. The bench was sculpted by Nicola Henshaw based on ideas following a workshop with the pupils of Winnall Primary School. 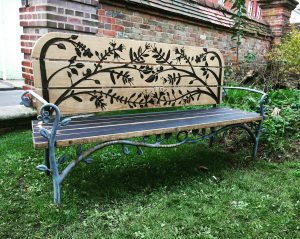 The Dean Garnier Garden Fish Sculpture – Hidden in the Dean Garnier Gardens tucked away within the medieval walls of the Cathedral’s Inner Close is the Fish Sculpture. Designed by Charles Normandale and the team from Wheely Down Forge Ltd, the sculpture shows a swirling shoal of fish rising upwards from the rock reflecting the changing colours of the sky and accentuating the surface of the fish.

Luminous Motion – Make your way to the Square via the Cathedral outer close you cannot miss Luminous Motion, an interactive design created by artist Peter Freeman. The light column changes its appearance when visitors text certain words into the number displayed on the piece, the first art instalment in the country to reply on text messaging. 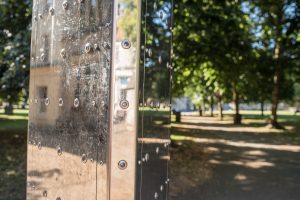 The Bollards – The Square is home to a selection of painted bollards in the style of classic artists. The idea was first conceived as part of Hat Fair in 2005 and the bollards have become stunning objects of art in their own right. A new addition to the collection is the NHS bollard, created by The Colour Factory as a thank you to all the men and women in the NHS who have gone above and beyond during the coronavirus pandemic. 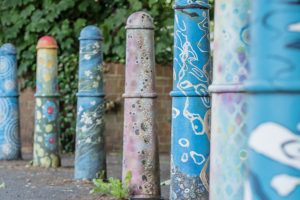 The Kite Flyer – Along Parchment Street look up and you will find the locally famous Kite Flyer. Standing at nearly 6metres the bronze figure, created by sculptor Marzia Colonna, stands upon a bridge that spans the street. The bridge was constructed locally by Denmead’s Metal Art Design foundry. 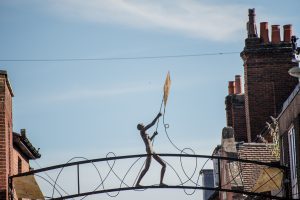 Horse and Rider – Near the top of the high street stands a bronze statue of a horse and its rider. This life size sculpture was created by Elizabeth Frink, with an identical statue placed in Bond Street London.

Hampshire Jubilee Sculpture – Celebrating 50 years of the reign of Elizabeth II this sculpture was created by sculptor Rachel Fenner, who was inspired by Winchester’s castle and cathedral. The piece is made from hard French limestone and her colour palette for the mosaics is influenced by medieval manuscripts.

To Honour a Promise – At the base of the steps at the Great Hall is a memorial dedicated to the service personnel who passed through the Winchester between 1914 and 1918. During World War I Winchester became a major transit location for troops destined for the Western Front and battlefields and To Honour a Promise, designed by Simon Smith, is a tribute to them.

Hampshire Hog – This bronze figure, created by David Kemp, was designed to celebrate the centenary of Hampshire County Council. You will find the hog outside the county council offices, opposite the Westgate. 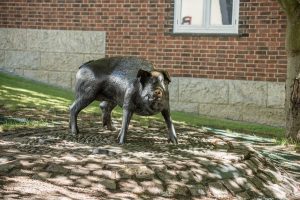