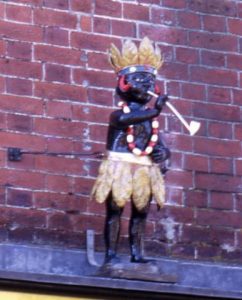 The history can be traced back as far as 1617 to the Prior family who became wealthy merchants. In the 19th century it was referred to as the headshop of the town and was run by two brothers, Thomas and George Clark who, apart from being grocers, were farmers, maltsters, hatters, corn dealers, coal merchants, tailors, cheesemongers, undertakers, bakers, soap and tallow chandlers! The Clark family dominated and owned much of the town throughout the 19th century.  Above the shop in the mid 19th century there was a figure of a black boy (the symbol normally used for a tobacconist).  It was the custom to tilt at this model and lasso it while galloping at full speed down the High Street.

Now continue on up the High Street to the Clock next to the Stainer’s bakery.