Hat Fair through the years

Hat Fair is a family- friendly festival with colourful performances and astonishing outdoor arts attracting artists and audiences from across the world to the city. Unfortunately this year’s festival has been cancelled due to coronavirus. So while the city dreams of next year’s festival and eagerly awaits its return on the 2 – 4 July 2021, we take a look back at its history… 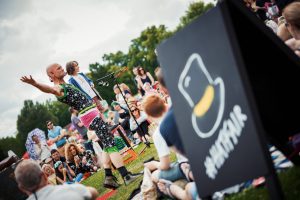 The festival was founded in 1974 by Jonathan Kay and is now well established as the UK’s longest running festival of outdoor arts. Kay drew his inspirations from the people, heritage and public spaces within the city of Winchester. From then until now the festival continues to bring the city to life, transforming the everyday into the extraordinary.

Throughout the country buskers have taken to the streets to share their incredible talents. Hat Fair was originally conceived as a busking festival and takes its name from the tradition of buskers laying a hat at their feet during performances for appreciative audiences to place money in.  The hatting tradition is still encouraged at Hat Fair with a selection of the world’s finest street performers invited to ‘hat’ at the festival each year. The hatters perform alongside international outdoor artists who are paid to perform.  The festival also provides a platform for young and emerging artists, as well as community choirs, performers and dance troupes.

The Hat Fair festival is part of Without Walls – a network of festivals that works with and supports artists to create and commission fantastic Outdoor Arts.

This year was the 40th anniversary of the festival and the colourful celebration of theatre and music didn’t disappoint. With interactive installations around the town, walkabout acts and a Mad Hatter’s tea party, Hat Fair was jam packed with things to see. 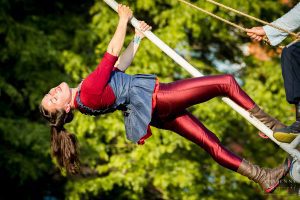 2015 brought us the Knowledge Emporium presented by Slung Low which celebrated the unique knowledge we each have. Visitors to the sweet shop, taking residence in a converted van situated outside the Winchester Discovery Centre, could trade knowledge – stories, recipes, anecdotes or facts – for sweets. The information gathered was then transformed into a performance at the Great Hall. This year also premiered new shows from home-grown talent like Wet Picnic (http://wetpicnic.com/#home-section) and dazzling dance performances including a festival favourite Stopgap. 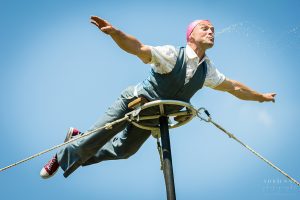 Once again unforgettable artists amused the audiences. The Amazing Camera Obscura, based on an ancient optical device, projected images into a chamber revealing the rest of the festival outside  and Miss High Leg Kick’s triumphant arrival onstage was greeted by whoops and cheers; a real city wide celebration of the extraordinary.

2017 was another fun and fabulous year for Hat Fair with three days of truly unique performances to enjoy throughout the city and, as in previous year, lots of opportunities to get involved. Visitors could turn their hand (or foot) to Swing-dancing for the city-wide flash mob event – Swingtime or enjoy the havoc created by Hat Fair favourites Street Comedy.

Like previous years the 2018 festival kicked off in style on the Friday with the energetic and spectacular Hat Fair Parade featuring hundreds of local school children parading from the Cathedral to the Guildhall. The weekend continued with thrilling performances from NoFit State Circus and Motionhouse with their dance-circus collaboration BLOCK, Sur Mesure’s Fillage – a fusion of circus arts and musicians, and a giant inflatable whale which visitors were encouraged to enter and hear wonderful storytelling by Circo Rum Ba Ba. Festival goers could also explore the city using their phones as part of the sound and movement trail, The Hum Winchester by Flexer and Sandiland.

2019 was a record breaking year for attendance with over 96,000 people at the countless theatre, dance, circus, music (and more) performances that took place across the city. The festival kicked off with hundreds of local school children singing and dancing their way through the streets in the Hat Fair Carnival – an riotous explosion of music and colour.  Motionhouse returned with their extraordinary WILD, Hat Fair favourites Street Comedy brought mayhem to the streets and Tickertape Parade’s Fantabulosa taught children and adults how to love whoever they are, or desire in a colourful show of song, dance, storytelling, lip-sync and more, performed by drag performers. 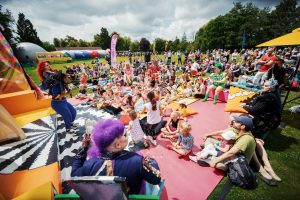 Hat Fair is renowned for bringing the world’s best street performers to the city of Winchester for three days of colourful and extraordinary performances. The festival has been cancelled for 2020 but we are all looking forward to 2021. See more from the festival here or watch this video to enjoy the atmosphere of Hat Fair celebrations.

On Friday 3 July, what would have been the first day of Hat Fair 2020, Play to the Crowd has launched a Survival Fundraising Appeal – they need to raise £225,000 by the end of September. If you love what they do, you can donate on their crowdfunder page.