If you’re in the Winchester district from the 26 Mar – 3 Apr,
then why not check out these 5 things to do? 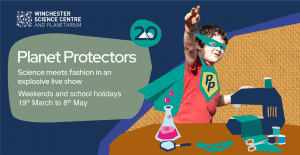 Strike a pose! Grab your velour tracksuit. Put on your tinted sunglasses. And dust off your all over denim outfit (we’re looking at you Britney Spears and Justin Timberlake). We’re taking you back to the ‘stylish’ days of 2002. In 2022 we’re celebrating 20 years of wow moments at the Science Centre. Take a trip down memory lane with us and enjoy some of our best show themes and demos from the past 20 years – all with a retro 2002 twist. Next stop – climate and environment. Back in the noughties sustainable fashion became a hot topic of conversation. We became aware of our fashion footprint. It’s a big deal. How clothes are made, how they’re shipped and where they end up when we’ve finished with them all impact our planet. So fashion designers, high street shops and scientists have teamed up. Innovative labs are finding new sustainable fabrics. Alternative fuels are being used in manufacturing and shipping. And the effects of waste from fast fashion are being tackled. All to help our planet! Let’s find out more together. Join the Planet Protectors, our very own team of noughties eco-fashion warriors. Explore the carbon cycle of clothes. Discover why green is the new black when it comes to fabric dying. And delve into the world of alternative fuels.

🎭 Be captivated by Frankenstein at Theatre Royal Winchester (24-26 Mar)

Blackeyed Theatre, in association with South Hill Park, presents Frankenstein by Mary Shelley. Adapted for the stage by John Ginman

“Beware; for I am fearless, and therefore powerful” Geneva. 1816. Victor Frankenstein obsesses in the pursuit of nature’s secret, the elixir of life itself. But nothing can prepare him for what he creates. So begins a gripping life or death adventure taking him to the ends of the earth and beyond.

🦕 Embark on an immersive adventure with Brickosaurs! Evolution! at Marwell Zoo (starts 1 Apr) 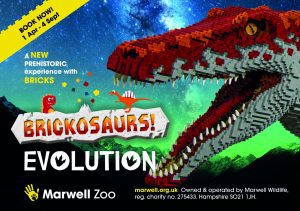 Marwell Zoo will unveil a world-first event featuring an all-new collection of 55 dinosaur sculptures this Spring.

BRICKOSAURS! Evolution showcases over 20 species made using more than 2 million toy bricks and will leave you in awe as you embark on an immersive adventure through the zoo.

The interactive expedition is sure to excite families, toy brick, and dinosaur enthusiasts alike.

Visitors will go back in time and come face to face with amazing pre-historic creatures such as the incredible seven-metre-long Spinosaurus, a nodding Heterodontosaurus, and a huge Mosasaur emerging from the water.

Enthusiasts will be able to test their knowledge along the trail with a host of fascinating dino facts and build stats at every turn.

There will be plenty of photo opportunities too, including a sit-in Carnotaurus, a giant dino egg, and the chance to get up close to nine adorable baby dinosaurs.

At the Fossil Zone, kids both big and small can literally walk in their favourite dinosaurs’ footsteps on the fossil pavement, plus prepare for a few surprises!

The event will take professional builders at the Hampshire-based workshop of Bricklive International more than 9,000 hours to complete.

🥚 Can you find the hidden eggs at Gilbert White’s House? (starts 2 Apr)

Find ten eggs hidden in Gilbert White’s Garden and spot the odd one out to claim a chocolate egg! Learn about our native birds and their nesting habits as you hunt out the eggs.

⛪ Be entranced by the Choral Pilgrimage 2022: An Old Belief at Winchester Cathedral (2 Apr) 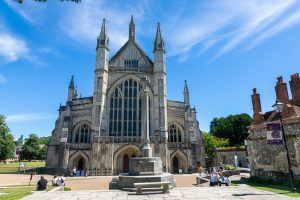 Hubert Parry’s Songs of Farewell must surely rank among some of the finest choral works ever written. Deeply affected by the First World War, Parry sought poetry that would reflect not only peace and unity and the search for a better world, but also an escape from the horrors of war.

The poems Parry chose to set are sublime, be they metaphysical poetry by John Donne and Henry Vaughan or the aching beauty of Thomas Campion’s verse. Perfectly complementing the rich sonority of Parry’s Songs are three short pieces by Campion, a selection of medieval carols and a new work by Cecilia McDowall.